From 1980 to 1995, Pearce Structures designed and built architectural applications based on the Multihinge system, many with integral glazing and cladding systems.  During this period, over 80 projects were completed enclosing nearly 2,000,000 square feet of surface area. Although the Biosphere 2 project is perhaps the most well know, there are many other significant projects. Some of these projects are included in this presentation. Most of these projects were developed in cooperation with architectural firms. 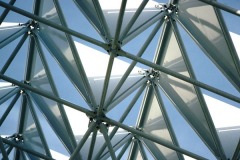 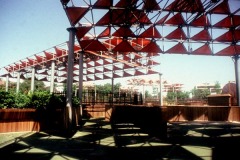 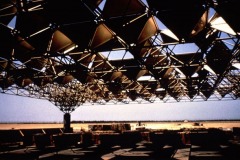 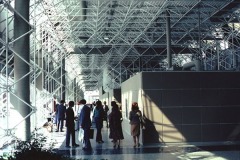 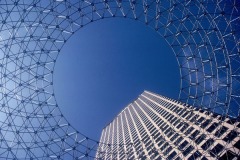 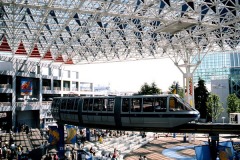 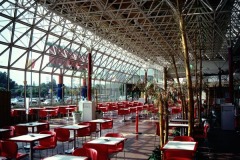 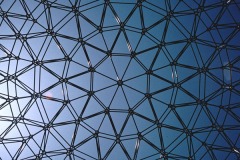 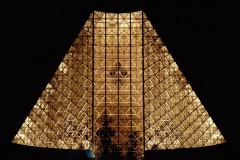 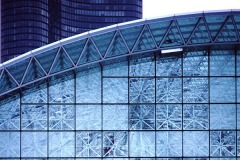 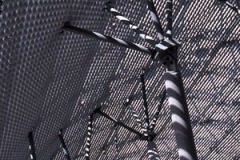 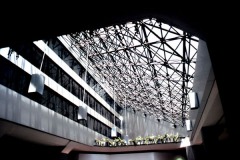 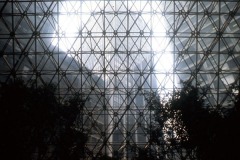 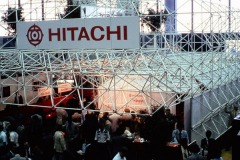 Designed to provide shaded outdoor play spaces for children whose medical condition prohibits them from sustained exposure to direct sunlight.

Designed to reduce heat gain in the summer from solar radiation.

Glazed canopy of 63,000 square feet with a clear span of 300 feet. Large member structure with each strut approximately 3 meters in length.

The Navy Pier project consists of two main structures, the family pavilion/winter garden and the exposition hall.  Together they comprise 340,000 square feet of surface area.  Both structures are space truss groin vaults clad with glass and insulated metal panels.

The Fremont Street space truss vault links a four-block-long segment of downtown Las Vegas.  This overhead canopy is 100 feet wide and extends to 1400 feet in a series of 180 and 200-foot spans in the longitudinal direction.  These spans are supported with branching tree-shaped column capitals. The space frame vault supports a state-of-the-art graphic display system incorporating approximately two million light pixels.

The structures were assembled in a parking lot across the street from the building and lifted with a tower crane to a final destination within the building.

This two-level structure was designed and built for the Consumer Electronics Show. The design included an integrated floor, enclosure, and stairway system.