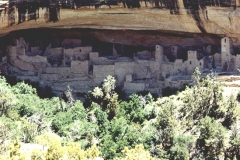 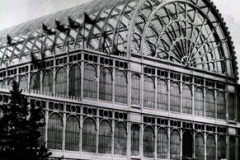 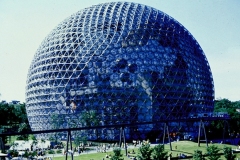 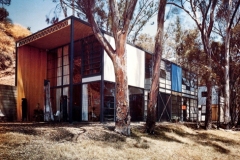 In Peter Pearce’s own words:

While at the Institute of Design at Illinois Institute of Technology in Chicago in the mid-1950s, my focus was product design with very little serious interest in building design and architecture. I was mystified by the building arts. Looking at typical buildings of the period, especially residential buildings, construction methods were opaque and design unintelligible.

As I arrived at the IIT campus in the fall of 1955, I was struck by the architecture of the campus. Many of the buildings were designed by Ludwig Mies van der Rohe, who was also director of the School of Architecture at Illinois Tech.

At that point in my young life, I had barely heard of Mies van der Rohe. The Mies buildings had an apparent directness to their design. As iconic steel and glass modernist architecture one could understand how these buildings might have been built – the geometry, the materials, the parts out of which they were assembled. Although the influence on my thinking and sensibilities was limited it did have an effect. I did enjoy being in that environment.

When I arrived in 1955, the Institute of Design was located in the most recently completed Mies building on campus. The building, which had just opened for the fall semester, is named Crown Hall and it housed the School of Architecture upstairs (the main floor) and the Institute of Design downstairs (the basement) – a veritable Upstairs/Downstairs social status environment. I spent three years working in that building. The downstairs was ordinary but the upstairs was quite spectacular. It was a column-free space 220 feet by 120 feet enclosed entirely with glass walls 18 feet tall. Although at that point I was not interested in building design I was impressed with the access to daylight and view that the glass enclosure enabled. No doubt this had a lasting influence on my sensibilities.

Indeed, I was unaware of the Eames House when I joined the Eames office. Though I was mostly involved in seating design I quickly became aware of the Eames house. Of course, on many occasions, I had the opportunity to visit this seminal house assembled from industrially produced standard steel components. The Eames house was clearly assembled from a kit-of-parts, which, for me, was one the most interesting things about its design. Of all of the Case Study Houses, this remains the most interesting from a consideration of its construction method. More than any other of the mid-century Case Study Houses, the Eames house demonstrated the idea of building from a kit-of-parts. To that extent, it certainly had a profound influence on my thinking.

The Eames House adapted standard steel industrial construction materials to its design form. Our Hólos House takes the idea of a kit-of-parts to a new level of sophistication. The Pearce Hólos House construction is based on purpose-designed components specifically manufactured for the project. It is a true building system, for which the Hólos House is a true prototype. Once the prototype is actually built and tested, the components from which it is assembled can be readily reproduced to be used in subsequent residential construction.

More generally, the mid-century Case Study houses profoundly demonstrated the idea of open plan design, with the generous use of glass to enhance interior living with natural light and access to nature. Such attributes were enabled by the forthright use of steel frame structures. Certainly, the attributes of kit-of-parts technology, open plan design, and the generous use of glass, and steel construction have had a strong influence on the conception and design of the Hólos House (aka The Pearce Ecohouse).

In some ways, our project could be considered an evolutionary step in a new modernist vision of residential design. The Hólos House assimilates the lessons of the Eames House, Joseph Paxton’s 1850 Crystal Palace, the ideas of Konrad Wachsmann, and the structural work of Buckminster Fuller. The Crystal Palace is especially interesting as a fully pre-fabricated, industrially produced cast iron and glass kit-of-parts building system. This amazing building remains one of the great and important influences on the future of modernist hi-tech architecture and is among my very favorite buildings.

Other important influences include the work of Ralph Knowles and, perhaps surprisingly, indigenous buildings, in particular the Mesa Verde pueblo. Ralph Knowles, Emeritus Professor from the School of Architecture at the University of Southern California, has studied the idea that building form could be determined as a diagram of the earth/sun geometry. In so doing the shape of a building can be optimized to manage the thermal impact of sunlight on the surface of a building. Heat gain can thus be minimized or maximized depending on local climate attributes. For example, a building shape can be designed to minimize energy use. The examples shown are theoretical studies that explore the implications for building design. I found these ideas very interesting and relevant to some of the concepts associated with the Hólos House design. Furthermore, the idea that building shape can be driven by the earth/sun geometry is consistent with my axiom that form is an agent of performance.

Longhouse Pueblo at Mesa Verde Colorado is a related influence. The Native Americans who built this community-dwelling chose to construct this building complex in a south-facing cave. At the high sun angle of summer, the Pueblo is in shade during the hottest part of the day. At the lower sun angle of winter, the Pueblo is heated directly by solar radiation. A helpful degree of passive climate management is provided for this Pueblo built within the south-facing cave. The Hólos House draws inspiration from this site built approximately 900 years ago by indigenous Americans.