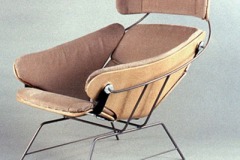 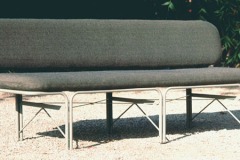 In addition to his development of the Cachet chair for Steelcase, Inc., and his work for Charles Eames, Peter Pearce has worked on a variety of other seating projects of his own initiative. Although working prototypes were built of these projects, none ever reached production. Three such projects are included here.

While a senior in 1957-58, at the Institute of Design of Illinois Institute of Technology in Chicago, Pearce designed and developed a prototype for a molded plywood lounge chair. It was this project that led to the position at the Eames office. This project incorporated a number of interesting innovations that integrated plywood, steel, and neoprene materials in a unique interactive system of suspension. Although promising, the chair needed more development and prototype iterations to be fully effective. To do so was beyond the scope of the student setting. Included here are two views of the finished prototype, a view of a paperboard mock-up, a view of Pearce sitting in the mock-up, and a view of a fixture that was used to form the central plywood component of the chair. The form of this chair design was driven by an interest, even then, of integrating form, structure, materials, process, and performance in the service of an effective design solution.

After leaving the Eames office to assume a position teaching design and photography at California State College at Northridge, Pearce developed another lounge chair scheme in the early 1960s. The goal was to use up-to-date manufacturing materials and methods that might enable a simple but comfortable seating solution. In this instance, glass-reinforced plastic was contemplated as a reasonable material to achieve manufacturing and design simplicity while creating a high level of comfort through optimized form and material properties. The result is a chair assembled from two relatively large molded components – a chair back and a chair seat – which were connected together with simple threaded fasteners. The seat component has a large opening that was spanned by a ductile membrane, which supported a 2” thick upholstered foam cushion. The contoured back molding supports a 1” thick upholstered foam cushion. The back molding occurs in high-back and low-back versions, both of which mount to the same lower seat/support molding. A small stool is included with the system, which can serve as an ottoman and/or a small coffee table. Shown in the images are some of the development steps. The chair went through a number of development iterations, the aftermath of which is shown in the last image. The chair is light, simple, and economical to produce. At the time this concept was developed the market opportunities were apparently considered limited and the chair never reached production. The prototypes were used for many years by the Pearce family and still exist.

The sofa was also developed in the early 1960s. It was a very simple solution consisting of bent tubular steel components, fabricated steel bar stock components, vinyl webbing, and upholstered foam cushions. The back was a wood panel supporting a 2” foam cushion, the entire unit is upholstered. The prototype was quite comfortable but, once again, the product never reached production. The Pearce family used the sofa for many years. The steel components still exist.