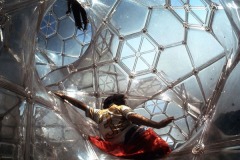 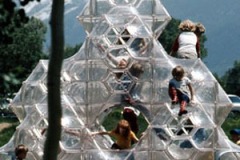 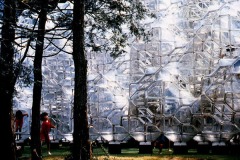 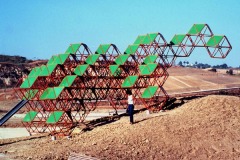 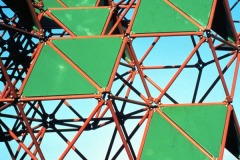 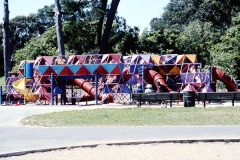 It was apparent to Pearce that his morphological research had a number of possible design applications. Of course, the primary goal of this research was to develop the theoretical underpinnings for the design of an energy-efficient responsive architecture. However, since the implications of the research implied a major paradigm shift over existing approaches to design, the implementation of such a shift would likely be met with a lot of resistance in the culture of building. That suggested that progress might be made with incremental steps that would be less ambitious than full-scale building applications.

Applications in recreational environments seemed like opportunities, such as children’s play spaces and educational toys and games. Two distinct but related approaches to playground structures were undertaken with effective results. One system, based upon the saddle polyhedra and continuous surface morphologies was implemented under the name of Curved Space. A second system, predicated on the geometry of triangulated frameworks was made possible by the development of the Multihinge system. Called Climbing Clusters, this was the first real application of the Multihinge structural system. Both these systems are described and shown with many installed projects. Educational toys were also developed and are presented in another section of this website. Both the playground structures and the educational toys were developed and produced under the auspices of a company called Synestructics, Inc., which was co-founded by Pearce and Michael S. Bank. This company, which eventually evolved into Pearce Structures, Inc., was in operation from approximately 1970 to 1980.